﻿The Alliance Quest spans five days, and each day lasts summoners will team up to conquer a specific level over a period of 24 hours.

Alliance Quests are currently one of the only opportunities that allow summoners to to strategize and fight alongside one another to defeat an opponent and win prizes. Communication and strategy are essential to success in the alliance quests.

You can find the AQ Team you have been assigned here

AQ participation is mandatory in MXLV. Members who are unable to participate during a specific AQ should inform an officer in advance, so relevant group changes can be made.

The requirement for the current week's AQ will be posted here and on Line Notes, in the alliance social room

On the fourth season of Alliance Quest, there are six different AQ Maps and MXLV will present the sequence of Maps we will be tackling before the AQ event begins. You can see the sequence listed here:

Kang is the final boss on all maps. However each map will have a different mini boss. Alliance members can learn more about the bosses below, and attempt dueling some of these bosses at high levels for practice. 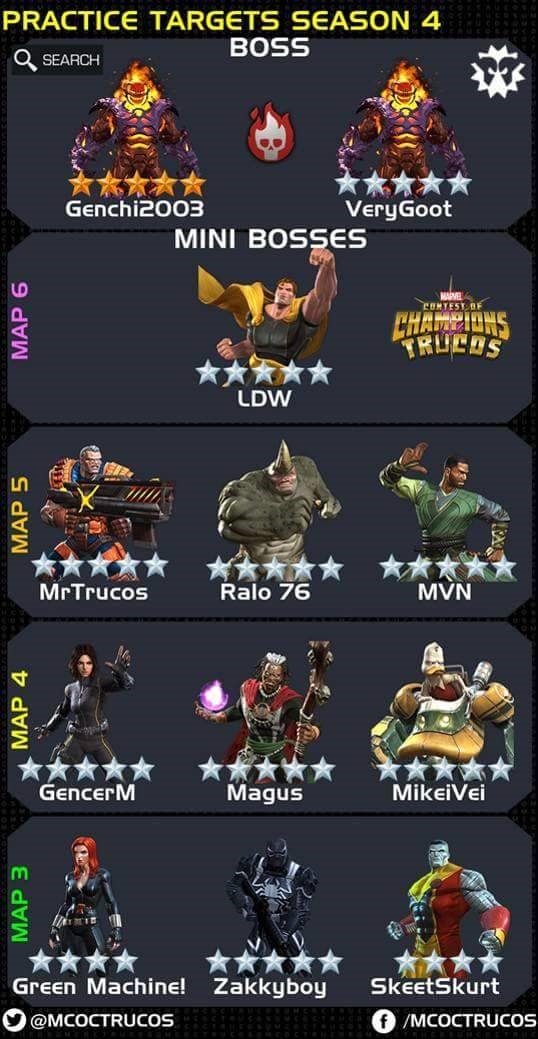 The Essentials of AQ

Each round that is 100% completed gives a large boost in prestige, which makes the following round more incrementally more difficult. Each map has two sub-bosses and Ultron as the final boss. Defeating Ultron awards the most points, so it is important that summoners play with that end goal in mind.

Selflessness above all - Not every summoner will be equipped to take on and destroy Ultron or one of his mini-bosses. Given the design of this game, different summoners are sometimes better equipped with defeating a specific enemy.

Its always a great thing to have your name appear on the scoreboard. However this should never come as a result of selfish gameplay. Waiting for the summoner behind you to take down a node because it is "too tough" or saving your hero to take on the final boss are not good signs of teamwork.

Defeating a boss can become a costly affair if not handled in a smart way. Working as a team selflessly is usually the best way to achieve success.

Energy Sharing - In the event that you are killed on AQ, and do not have the resources to revive, you can still help out your team mates by sharing your energy with them... Even when you don't fight opponents, you can help your team mates quickly progress through your path's opponents by simply leading the way and sharing your energy... This allows the five energy to become ten and can be crucial in finishing a path

Summoners who are participating in AQ should always be aware of the following: